For shipping outside of the UK, VAT and Import charges may apply. Find out more here. 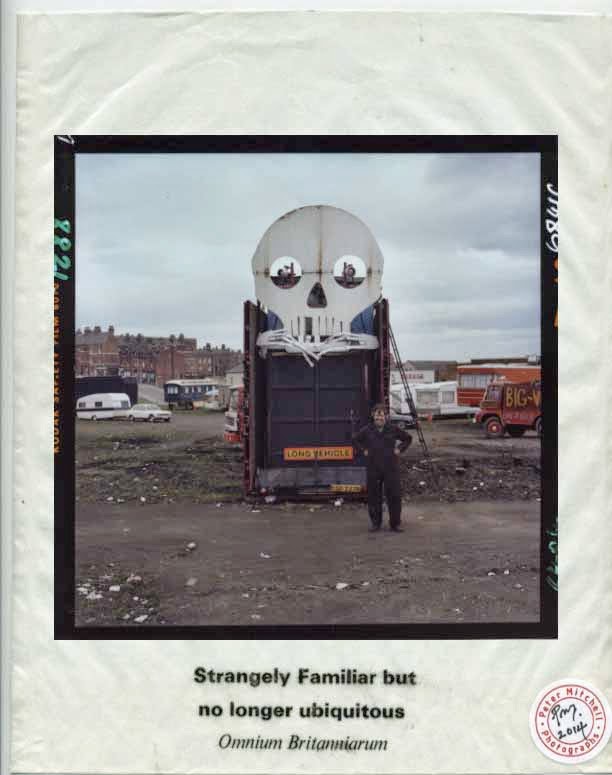 A few weeks ago I visited Peter Mitchell in Leeds. As we went through his files we came across a photograph of Francis, the Ghost Train Man. I had seen the picture before, in a lecture Peter gave in Bristol at the end of last year - it instantly became one of my favourite of Peter's images. When I asked him why it was not included in the book Peter thought that it had been, but when we checked, we found that somehow the Ghost Train Man did not make it to the final edit.
About the same time I managed to lose a box of Peter Mitchell’s book, Strangely Familiar, all of which he had signed and dated when he came to visit Bristol. Fortunately, the box has now resurfaced in the warehouse and we thought it was time to reunite the book with the Ghost Train Man, and so we are offering the book accompanied by a special edition print of Francis (pictured above, with the legend 'Strangely Familiar but no longer ubiquitous' and stamp signed by Peter.)
The book itself is out-of-print and was one of the fastest selling photobooks of 2014. Unfortunately there is unlikely to be a second edition.
We have 25 of these signed copies of Strangely Familiarwith the print, available at £150 each. For those who already have a copy of the book, we have another 15 prints available on their own at £75 each.
Please email rrbphotobooks@gmail.com if you would like to take us up on either of these offers.
Thank you Peter...