“Much Ado About Nothing” (Dirk Bakker) A Visit to Kassel

One of the problems with the Kassel Fotobookfestival is that it is in Kassel, right in the middle of Germany, a fairly dull place without any distractions on offer. But who needs distractions when you are presented with four days of Daido Moriyama, the star attraction at this years Festival? 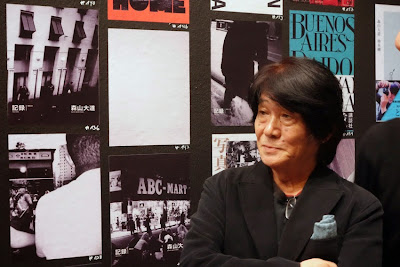 I only attended for a couple of days, but still I would have welcomed some other entertainment. The programme was rather unbalanced with little on offer beyond Moriyama; the vibrancy of previous Kassel was somewhat lacking. This may have been partly due to much lower attendance - whilst there was talk of 3000 people through the doors, I counted about 150 punters on Friday afternoon.
Given the enormous amount of work and resources involved in putting on the Festival, this is disappointing for the 55 companies and organisations who sponsored the event. Very few of the Booksellers and Publishers I talked to were covering costs and to my eye there appeared to be more sellers than buyers. Have festivals of this type reached saturation point or was this simply due to the programming and bad timing?
On a more positive note, the Moriyama displays were really impressive (and the soups in the Café were very good too). And of course it was great to see so many photobook enthusiasts in one place. For me the most interesting stand was Café Lehmitz, Richard Sporleder's thoughtful fingers-on-the-pulse selection which contained most of the more exciting and exotic releases from this year.